A visit to Southam

We visit a number of towns local to Banbury to provide forklift training and we’ve recently been to Southam.

Southam is a thriving market town sat in the beautiful South Warwickshire countryside and is a designated conservation area.

It has a rich heritage and some interesting architecture and it’s history can be traced back as far as 998 AD.

Southam used to produce it’s own currency in medieval times because the local people found regular English currency too high in value.  During the English Civil War, Charles the 1st used Southam’s mint to make new coins to pay his troops.  The old mint nowadays is a public house.

RAF Southam was opened in 1940 and was used mainly as a training base and also as a relief landing ground.  The airfield was situated some half mile east of the town and closed at the end of 1944.

Southam has a successful business community and the industrial estate to the south of the town is a major source of local employment.  Europe’s largest privately owned computer games company, Codemasters, was founded by two locals and is based nearby. The Dallas Burston Polo Club, an award winning events venue, is also located just outside Southam on the Leamington Road. 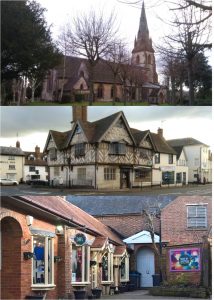