A scrap metal firm and its director have been sentenced after a Manchester worker suffered severe injuries to his left arm when it became stuck in a forklift truck. 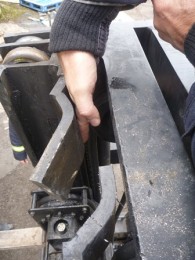 The worker remained trapped for over two hours while the emergency services tried to free his arm from the vehicle’s mast on 8 November 2013.
The company and director were prosecuted by the Health and Safety Executive (HSE) after it emerged he had been told to stand on the forks of the truck to help move scrap cars into the back of a shipping container.

The worker suffered severe crush injuries when his arm became trapped and it took the combined effort of three fire crews, a specialist major rescue unit, two air ambulances, a medical team from Manchester Royal Infirmary and three ambulance crews to rescue him.

He sustained nerve damage to his left arm which makes it difficult for him to grip or lift items, and was in hospital for nearly two months. He still needs to visit Manchester Royal Infirmary for treatment and has been unable to return to work due to the extent of his injuries.

The court was told the company failed to report the incident to HSE for nearly three months, despite being told on several occasions that this was a legal requirement.

For the full story see Press